Recently I was in Japan with my Ikebana Master, Megumi Bennett, who had organized a tour for her Bonsai Students (of which my husband is one). She called it a “Bonsai Tour of Japan” (20 of us in the group). We visited gardens, forests, lakes, waterfalls, nurseries, temples and shrines from Kyoto travelling north to the sea-side town of Aomori and back south to the 8th International Bonsai Convention in Megumi’s hometown of Saitama. Some of you may have followed my pictorial record on Facebook during April to May 2017.

Like Japanese bonsai and ikebana, Japanese poetry has become an art for everyone in the world. It is said its beginnings came from verbalizing human emotions which then evolved into song. By the Meiji period (1868-1912), the “rules” for the most famous form of Japanese poetry, the Haiku, became set: three phrases/lines of 5, 7 and 5 syllables. In old Haiku there is a seasonal reference and a moment of separation of two images or ideas leading the imagination to emotion. (In translation to other languages some of this form is lost).

In the Edo period (1603 – 1868), the master of Haiku was born: Matsuo Chūemon Munefusa, known generally as Basho. I love the juxtapositions in his poetry. For example,

Every day is a journey, and the journey itself is home.

The temple bell stops but I still hear the sound coming out of the flowers.

What has this to do with 28th May 2017 and Megumi Bennett’s Bonsai Tour?

We crossed Basho’s path three times during the tour:

·      at Chusonji Temple, the head temple of the Tendai sect of Buddhism in Tohoku, Hiraizumi, a UNESCO World Heritage Site since 2011. Basho visited there in 1689 and his statue is in the red Japanese maple gardens near the protective outer building (the Sheath) that surrounds the Golden Hall (Konjikido) in which lie the remains of four generations of the Oshu Fujiwara, a noble family of the twelfth century;

·      at Matsushima Bay where Basho resided in nature for a time in 1689 when he was travelling on foot from Tokyo to the northernmost shore. Megumi took us to the hill where Basho is believed to have looked down at the bay and its 260 stone islands covered with wind-bent pines (akin to the windswept bending of bonsai). We stood next to a poem Basho is said to have inscribed on rock (the inscription is not protected, eroded and difficult to read). He documented this 6-month journey in Narrow Road to the Deep North; and,

·      at Motsuji Temple remains and land garden (a Japanese garden around a lake) where Basho composed one of his most famous poems in which he reflects on the impermanence of glory:

At Motsuji, on the fourth Sunday of May, a “water poetry party” is held (Gokusui no En). Commenced in the Heian Period (794AD – 1185), the nobility of the time dressed up and would sit by the yarimizu (winding stream) and compose Tanka poems. (A Tanka poem is similar to Haiku but has 31 syllables in 2 additional phrases/lines. Tanka uses simile, metaphor and personification). Judges would select the best. Nowadays, the celebration continues. Megumi told us that each year at Motsuji poets dress up, sit and write poetry, their work is judged and then the poems are floated down the stream into the lake.

When we were there they were preparing the celebration and had launched dragon boats onto the lake (to catch the poems?). This year it’s being held on 28th May 2017. Oh, to be there!

Here are some photos and more Basho poems:

Do not seek to follow in the footsteps of the wise. Seek what they sought.

Real poetry, is to lead a beautiful life. To live poetry is better than to write it. 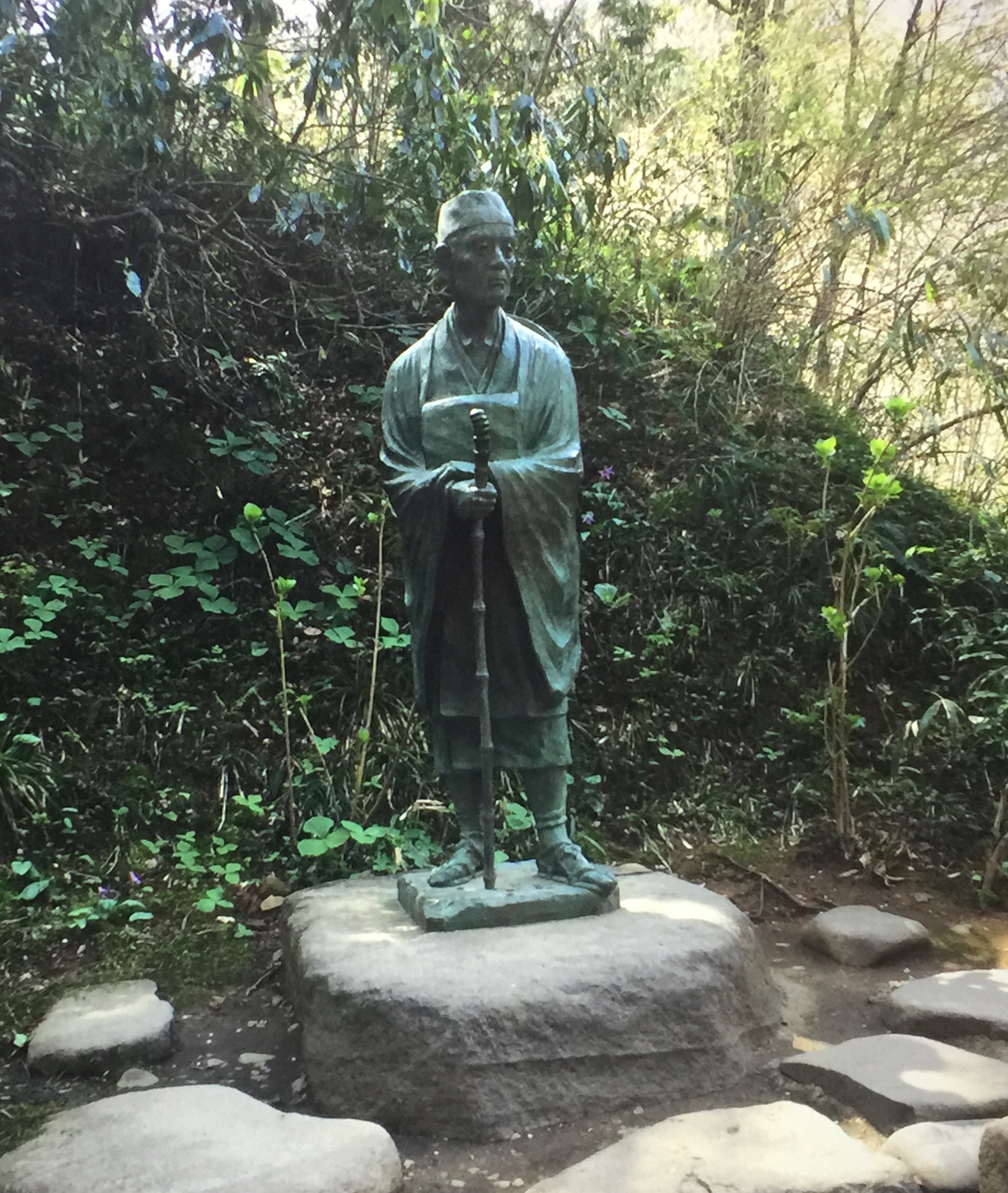 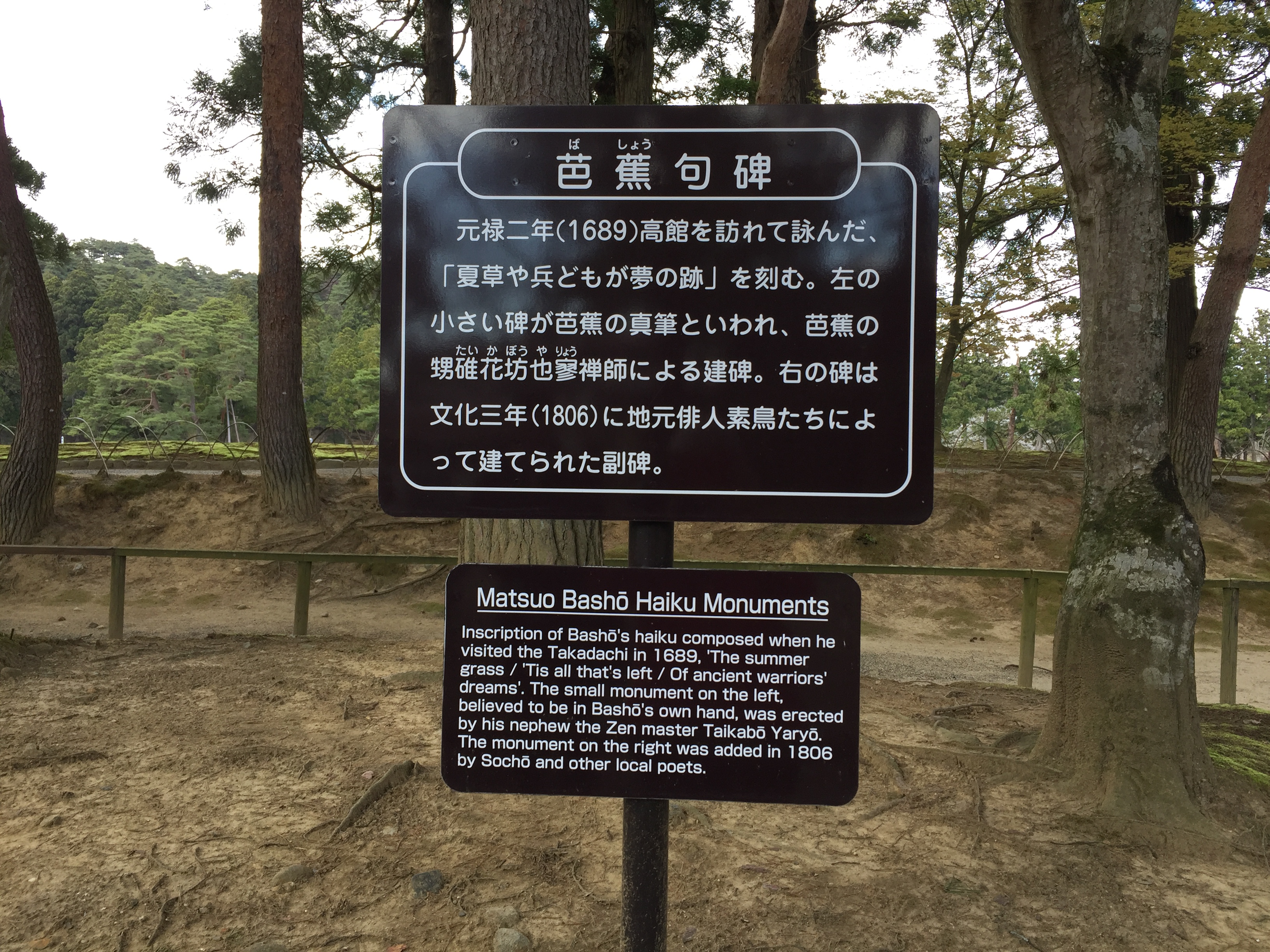 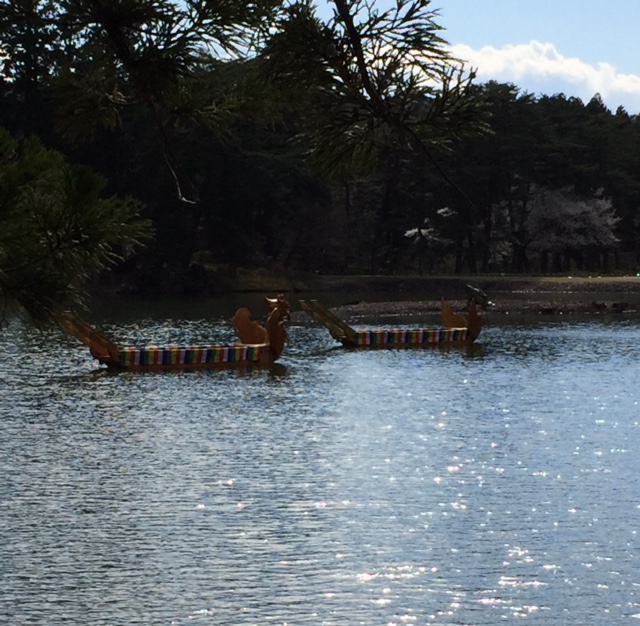