The CBCA Northern Sydney Sub-branch’s formation was due to the hard and persuasive work of Author Aleesah Darlison and then-Teacher-Librarian, Lindy Batchelor. I was fortunate enough to be on the inaugural s/b committee as Secretary for many of its early years and saw the s/b foster several writing careers, most notable of which were the careers of Belinda Murrell and Oliver Phommavanh as well as Aleesah’s. Already-famous children’s author Wendy Blaxland joined us on the committee along with northern beaches public and private school teacher-librarians and many events and fun activities have been organised over the past ten years, notably “Lunch with the Stars” in September each year at Manly.

Last week’s party was organised by the indefatigable Teacher-Librarian Kirsty O'Rourke, with a special cake made by the Club. Guest Speakers were Author Margaret Wild and Illustrator David Legge who were interviewed by Lindy about the current state and their perceptions of the future for the children’s book industry. And then the Committee sang accompanied on keyboards by Previous President and now Vice-President Wendy Fitzgerald who had composed a happy song to honour Guests Margaret Wild and David Legge.

A highlight of the night for me was a stunning visual record of the past ten years prepared and presented by current President and Author Jan Latta. Jan thanked so many people individually for their contribution to the s/b over the years – quite a feat – and Wendy Fitzgerald's accompanying commentary was hilarious. Bookseller and Publisher Paul Macdonald of The Children's Bookshop, Beecroft, was given a special mention for his support over the years; Paul conducted a bookshop on the night. A souvenir bookmark designed by the talented author and tech whizz Matthew Shallvey was given to every one who attended the dinner. Donations for raffles were contributed by publishers Scholastic Australia, Walker Books Australia, Hachette Australia Children's Books, Hardie Grant Books, Wombat Books, Pan Macmillan Australia, New Frontier Publishing and Penguin Random House, all great supporters of the CBCA. Jan thanked them for their continuing support of CBCA. 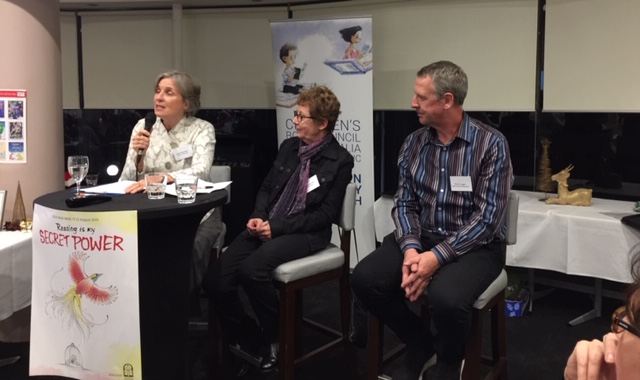 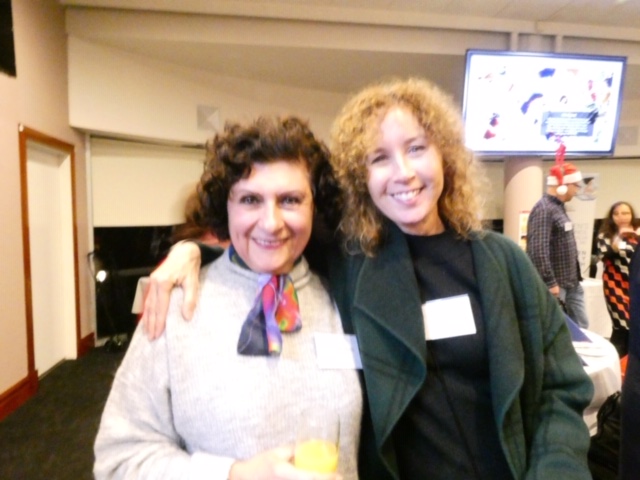